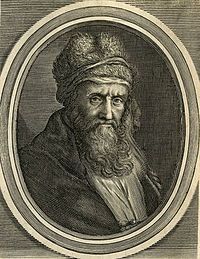 Diogenes Laertius (3rd century AD) was a biographer of the Greek philosophers. His surviving work, Lives and Opinions of Eminent Philosophers is a principal source for the history of ancient Greek philosophy.

He it was who brought geometry to perfection, while it was Moeris who first discovered the beginnings of the elements of geometry: Anticlides in his second book On Alexander​ affirms this,  and further that Pythagoras spent most of his time upon the arithmetical aspect of geometry; he also discovered the musical intervals on the monochord. Nor did he neglect even medicine. We are told by Apollodorus the calculator that he offered a sacrifice of oxen on finding that in a right-angled triangle the square on the hypotenuse is equal to the squares on the sides containing the right angle.